Is there a more decadent way to start the day than with a cup of rich café au lait accompanied by a buttery, flaky croissant? This version is light, airy, and oozing with melted chocolate, but you don’t have to fly to Paris or even make a trip to your local bakery to get one. Prepare to swoon, because this perfect pastry comes from…
Trader Joe’s!

I went to Paris a couple of years ago and tried pain au chocolat all over the city. When I returned home, I wanted to recapture the experience, so when I saw the chocolate-filled croissants in the frozen section at Trader Joe’s, I decided to try them out. I didn’t have high hopes when I popped one in the oven, but my mouth watered as the smell of freshly baking pastry began to waft through the house. 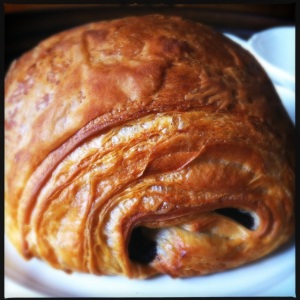 When the timer dinged, I was amazed to see that the nondescript blob of dough that went into the oven had emerged as the golden perfection of the pastries I’d enjoyed in France. And the similarities were not just skin-deep. For flavor and texture, these croissants from TJ’s can hold their own against anything in a Paris boulangerie. In fact, they might even be better, since they can go straight from the oven into your mouth.

Unfortunately, they are not something you can make on a moment’s notice. The frozen dough must proof at room temperature for at least 9 hours before baking, so you’ll need to remember to set them out the night before you plan to make them.

I have been enjoying these croissants regularly for the past two years and they are foolproof if you follow directions. After proofing for 9 hours (or up to 12 hours in cold weather), put them in a preheated oven at 350 degrees for 20-25 minutes on a parchment-lined baking sheet (My oven cooks faster in the back, so I turn the sheet halfway through baking). They are flawless every time. Since all ovens are calibrated slightly differently, you may need to tweak the baking time a little, but once you figure it out…oh là là!

And I can’t believe that, as a committed chocoholic, I’m saying this, but I think I like the almond version even better. The almond croissants are crispier than the chocolate ones and have a delicious filling that’s reminiscent of marzipan.

An employee at my local TJ’s told me that people are always raving about these croissants and the reason is that they are actually imported from France. So, if you crave the taste of Paris, but don’t have the time or money to hop on a plane, Trader Jacques* is at your service. Bon appétit!

*Jacques is the equivalent of James—not Joe—in French, but Trader Joe’s uses the name Trader Jacques on most of the French-themed items that it sells.

Shortly after writing this post, I had an inferior croissant from Trader Joe’s for the first time. The texture was different and there was noticeably less filling. Thinking it might have been a fluke, I bought another package of both the chocolate and almond versions. Again, the quality had dropped significantly. They were drier and less buttery than they used to be (the almond was worse than the chocolate) and had just the barest hint of filling.

I mentioned this to an employee of the store, who gave me a sheepish look as he said that sometimes the company is forced to change suppliers and the product will be slightly different. I got the feeling that this wasn’t the first time someone had complained about the recent quality of the croissants.

This news has taken me from bon appétit to non appétit. Unless the situation changes, I will no longer be purchasing these croissants. I’ll keep you updated on the state of Pastrygate. Until then, I may have to change the name of this post from At Croissant Purposes to My Croissant to Bear. 😦

I was passing through the frozen foods section at Trader Joe’s last week and decided to grant the croissants one more appeal. I purchased both the chocolate and almond versions and made them on alternate mornings for the past few days. I am happy to report that, upon croissant examination, these pastries have been cleared of all wrongdoing! Actually, while the chocolate croissants seem to have been completely rehabilitated, the almond ones still have some minor offenses on their record. The texture, while infinitely better than the criminals that caused me to lodge my complaint, is not quite up to par, and the filling is still a little sparse, but they’re on the path to redemption. Therefore, my former ruling has been overturned and these pastries have been granted a conditional pardon. They will be on probation for a period of time, but it is my conviction that this trial is over and you are now free to enjoy Trader Joe’s croissants again. Case dismissed!

3 thoughts on “At Croissant Purposes”