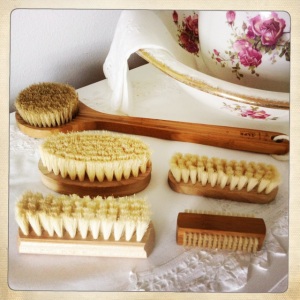 Want skin that’s so soft and smooth it would make a baby swoon? Then give it the brush-off! Dry skin brushing has probably been around since the invention of the brush, but it’s gained in popularity over the past several years as people have discovered its multitude of benefits.

I got caught up in the raw foods movement as it was starting to become trendy in the early 2000s. Like most of those who jumped on the bandwagon, I quickly fell back off, but there were a few practices I adopted then that I continue to this day. One of those is dry skin brushing. Many raw foodists recommend dry brushing as a way to assist the body with detoxification and ease any “healing crisis” symptoms as it adjusts to a cleaner diet. I never experienced a healing crisis (although I did fantasize about bread for several hours a day), but the idea of dry brushing appealed to me. It’s natural and economical and only requires a few minutes each day. Plus, here in drought-parched Southern California, doing your exfoliating before you get in the shower makes good sense. So I bought a wooden brush with natural bristles and got down to the business of scrubbing. Ouch—that hurt! 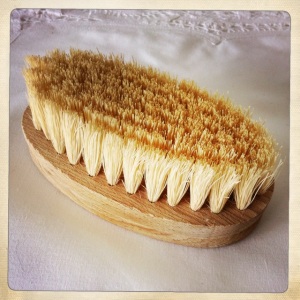 I like to dive into things feet first and had purchased a brush with stiff bristles, but I’ve learned with dry brushing that it’s best to start off gently and slowly. I’ve also found that certain brushes work better on different body parts, so I’ve amassed a collection over the years that covers all the bases.

My first brush was the CRT (Cellulite Removal Techniques) Skin Tightening Body Brush from T-Tapp, which has bristles made of stiff plant fibers. I only used it on my legs for the first week as I broke in the bristles and got into a routine, then I started using it all over my body. In a short amount of time, I was brushing like a pro and wondered how it could have hurt at first. This felt great! My skin would tingle all over afterwards, and it woke me up more effectively than a morning shower. 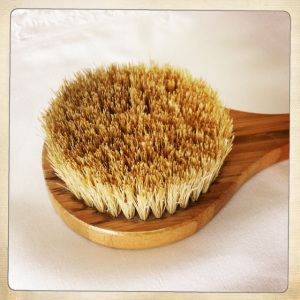 When a friend offered to give me her long-handled back brush from Bass because it was too rough for her, I eagerly took it…only to find that it was also too rough for me. Undaunted, I did as before, starting off slowly and building up a tolerance until I was scrubbing with gusto. People had said that dry brushing would strengthen the skin, and they were right!

However, neither of these brushes was suitable for the more sensitive skin of my face. I tried out a few face brushes, but found them to be either too soft or too rough, so when I came across the Facial Brush from Beautiful On Raw, I had a Goldilocks moment as I discovered that it was just right. Some people say that you should only brush the face once or twice a week, but I do it every day—sometimes twice—and have seen and felt only positive effects. 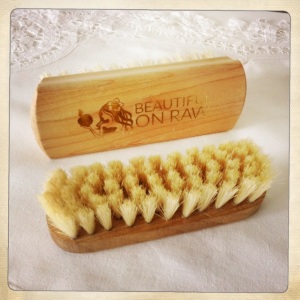 When the company came out with a body brush made of natural Tampico fibers, I quickly bought it, but I scratched myself up the first time I used it. I’d gotten so accustomed to brushing with a certain amount of force that I’d forgotten my rule to start off slowly. This brush requires a gentler touch, so I backed off a bit and have begun to make friends with it.

Now I’ve developed a routine where I use the Beautiful On Raw Body Brush on my legs (up to my hips), the T-Tapp brush on my abdomen, lower back, arms, and chest, the long-handled brush on my upper and middle back, and the Facial Brush on my face and throat. I recently added to my collection with a Bass natural bristle nail brush, which has short, stiff bristles that I like to use on my nails and the backs of my hands. 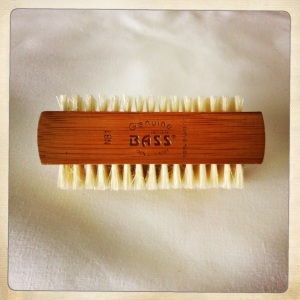 But you don’t need an army of brushes to get the job done. One good body brush and one facial brush should do the trick. Tonya Zavasta from Beautiful On Raw recommends that you NOT use a long-handled back brush, but try to increase your flexibility by reaching over your shoulders and around your sides with a regular body brush in order to scrub the back. I haven’t quite mastered this yet.

Whatever you do, make sure to clean your brushes regularly by washing them with gentle soap and water, patting the bristles with a towel, and either laying them in the sun to dry or resting them with the bristles facing down on an absorbent towel to prevent mildew.

Beautiful On Raw has a wealth of information about the history and benefits of dry brushing, along with tips and recommendations. Check it out, then start scrubbing! Once you’ve given your skin the brush-off, you’ll rebuff any other method.

Bass brushes are available at Whole Foods, Sprouts, and many natural foods stores.

2 thoughts on “The Brush-Off”