I am not a morning person. For most of my life I’ve leapt out of bed with just enough time to throw on some clothes, run a brush through my hair, and grab a toaster pastry or a bowl of cereal before heading out the door. Savoring a mug of freshly-brewed coffee isn’t in the cards, so I never developed the habit of most Americans to start the day with a cup of joe. I acquired a taste for afternoon tea instead and almost took pride in the fact that I drank coffee only a few times a year. 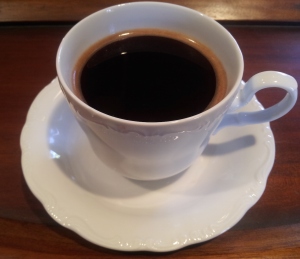 A while ago, I started seeing bottles of cold-brewed coffee on the shelves of various local markets. The idea of simply adding hot water to a ready-made concentrate appealed to me, so I decided to try it out and found that I enjoyed having a cup of coffee with my croissant on the weekends. Using the concentrate, I began to drink coffee more and more frequently, although not enough to become addicted (unlike my co-swooner, whose sunny personality has been known to turn dark when her caffeine fix is not delivered in a timely manner).

One day, when I’d run out of cold-brewed coffee and hadn’t yet been to the store to buy another bottle, I saw an open bag of Maui Mokka coffee in my mother’s refrigerator, which she’d brought back from a recent trip to Hawaii. The bag was full and it smelled divine, so I decided to appropriate a small amount to hold me until I could buy more concentrate. Having only tea accoutrements, I put the coffee in a pot with hot water and let it sit for a few minutes before pouring the brew through a fine mesh strainer. Delicious!

When I ran out, I pilfered more coffee from the green bag in my mother’s fridge. I figured she wouldn’t notice such small amounts, but this went on for more than two months. On the day I realized that there were only a couple of scoops left in the bag, I knew the jig was up.

I had to come clean. She was none too happy, so I offered to buy another bag online. In doing so, I discovered that MauiGrown Coffee refers to their Mokka variety as “our Champagne of coffee”—and that it was going to cost me more than $40 to have a bag shipped from Hawaii. Crime doesn’t pay, but I did!

Since then, I’ve had to drink other brands, but—though I’m by no means a connoisseur—I haven’t liked any coffee as well as the Maui Mokka. And, although my mother often drinks decaf, I suspect that she asked me to order the decaffeinated version for her because she knew I wouldn’t touch it. So I got the decaf and she got the last laugh. Alo-ha!

Maui Mokka coffee can be obtained by ordering from the MauiGrown Coffee website or by hopping on a plane to Hawaii. I recommend the latter.

2 thoughts on “Loca for Mokka”