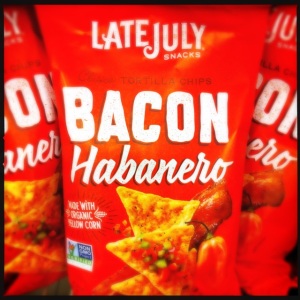 It might be early August, but it’s never too late to try these Bacon Habañero Tortilla Chips from Late July. As some of you know, I have a fondness for the chip, so I’m not sure how I’ve managed to miss these since they were introduced in January, but a recent special at my local market brought them to my attention and they are seriously swoon-worthy.

The term “bursting with flavor” is overused, but it applies in this case. Chip Review raves, “[W]e’re willing to bet that these are probably the most bacon-y bacon flavored chips that we’ve ever tried!” And that’s saying something, since they also happen to be vegan. That’s right, no Babes were harmed in the making of this snack, so babes—and boys—of all bents can enjoy them. And don’t be intimidated by the infamous pepper on the label. While some reviewers have complained that the seasoning doesn’t have the scorching heat of true habañero, I appreciate that I don’t need to consult a Scoville scale or put my doctor on speed dial before tearing into a bag of these chips. The blend of spices provides a pleasant, yet potent, heat that deliciously complements the smoky sweetness of the bacon flavor. 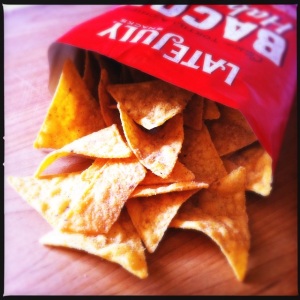 Bacon Habañero is one of four flavors in Late July’s line of Taco Truck-Inspired Tortilla Chips. I’ll probably pass over the Crispy Yellow Corn on my way to try Nacho Chipotle and Jalapeño Lime, but that’s assuming I can break away from this bright red bag anytime soon. In addition to being suitable for vegans, these chips are gluten-free and made from organic corn and non-GMO oils and seasonings, so get ‘em while they’re hot and save some bacon by stocking up when they’re on special. The next time I see a sale, I plan to buy enough to last me until late July.

Late July snacks can be found at Whole Foods, Sprouts, and many natural foods stores.