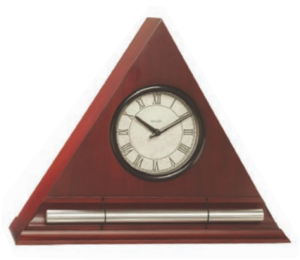 The weekend is almost here, and for most people this means the chance to sleep in without being rudely awakened by an alarm clock. I have written before about the fact that I’m not a morning person. Rising to wakefulness—even after a full night of sleep—can often feel like clawing my way up from the abyss, so the blare of an alarm in the midst of deep slumber is particularly jarring. In a case of Pavlovian conditioning, any time I hear a sound resembling that of an alarm clock, my heart begins to race and I feel a sense of panic. Just this week, I heard about a woman who wore her Fitbit to bed and found that her resting heart rate of 60 beats per minute leapt to 102 when she was jolted awake by her alarm. That’s no way to greet the day!

I pride myself on being punctual, but I’ve slept through my share of alarms. In high school, it was my father’s duty to be my second line of defense. He would come in my room to get me up after my alarm had either stopped on its own or I’d turned it off and promptly fallen back to sleep. Then he’d softly call to me and I’d assure him that I was awake…until I’d actually wake up five minutes before it was time to leave the house with no memory of our conversation, yelling at him as I ran out the door for falling down on the job.

As a night owl who comes alive when the sun goes to sleep, I’ve managed to find employment at a number of jobs over the years where my workday begins in the late morning or early afternoon and ends in prime time, but I still need a gentle “reminder” to get up most days. Fortunately, I discovered a clock that allows me to arrive at work on time while maintaining my Zen.

Now & Zen started producing their miraculous alarm clocks and timers 20 years ago “to make a real difference in people’s lives.” Judging by my personal experience, they have succeeded. Their clocks feature either a brass bowl on a wooden base or an acoustic chime set within a hinged or triangular case. When the alarm is triggered, a gong gently strikes the bowl or chime, causing a soothing tone to resonate. Over the course of 10 minutes, the gong strikes with increasing frequency until it reaches an interval of five seconds—the terminal cycle—when it will chime continuously until the alarm is turned off. 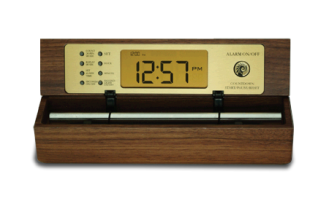 I have owned Now & Zen clocks since the late 1990s and I don’t know how I could have survived all these years without them. My first was the original Zen Alarm Clock®, but I eventually upgraded to the digital version for its compact form and added features. It is available in a 7-inch case with a B tone chime, but I sprang for the slightly larger 9-inch version that emits an E tone. Both offer the same progressive awakening feature, where the chiming advances according to the golden ratio*. An aspect of sacred geometry, this ratio is reflected in nature as a logarithmic spiral, such as that found in a chambered nautilus. Now & Zen uses an image of a nautilus shell on its clocks to illustrate this relationship.

Even with a peaceful summons to waking life, I still hedge my bets by placing the clock across the room so that I have to get out of bed to turn it off—there is no snooze button, so the danger exists of shutting the alarm off only to fall back asleep. I usually set the clock to strike three minutes before I want to get up. The first chime tickles my consciousness, so I’m already starting to awaken by the time the second chime sounds 3 ½ minutes later. On occasion, I’ve slept through the first two or three chimes, but I’m always up and out of bed before it reaches the five-second interval. Since using these clocks, the only times I’ve overslept were during a power outage or when I’ve forgotten to set the alarm (it happens).

Through the years, people have suggested I try other alarm clocks with gradual awakening features, such as a lamp that gets increasingly brighter to simulate the sunrise, but I’ve never found a reason to switch. In addition to a progressive alarm, Now & Zen clocks have interval, countdown, and meditation timers (demonstrated in these product videos) and can run on batteries or plug into an AC jack. They also come in a variety of styles, woods, and finishes. With all these choices, it’s easy to find your ZZZen.

*The progression of chime strikes is explained in detail on the company’s website and in their instructional booklets.

2 thoughts on “Find Your ZZZen”

Leave a Reply to The Swoon Society Cancel reply