The first time I stepped foot on Eagle Island, it was so foggy I could only see a few steps in front of me. My boyfriend (now husband) Aaron had been telling me about this island since we met—his most special place, his Disneyland, his Paris. We had traveled by plane, car and boat to get there. I couldn’t see more than a few feet in front of me, but the moment I stepped foot onto the shore, I understood that I was in a rare and magical place. 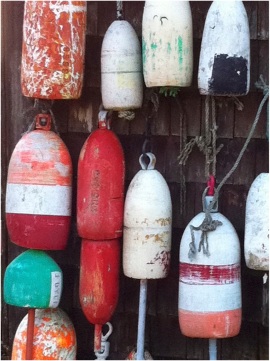 Eagle Island is only about a mile-and-a-half long by half-a-mile wide, but there are so many self-contained universes. There is a farmhouse in the middle of a big meadow, which is the hub of the island; a forest that has mysterious fairy bowers hidden throughout the trees, which no one lays claim to; an old schoolhouse from the 1800s that has not been touched inside for more than half a century; a small, but beautiful, cemetery; a lighthouse; a tiny post office; and a handful of gasp-inducing beaches so cinematic that they make you want to spontaneously burst into a rousing sea shanty.

The quiet splendor of this island rivals any great city I’ve ever been to, but what makes Eagle Island so special is that you feel like it belongs to you. You have to try hard to come in contact with other people here, so you can have the rare experience of not battling crowds, not angling for a better view or a perfect spot on the beach. You can just be still. You can listen to the sounds of insects buzzing. You can smell the ocean and feel the breeze on your skin. It’s not often we can be truly alone in beauty, and the island is restorative in ways other places can never be. The island belongs to you and you belong to it, and it’s a relationship you don’t take lightly. You want to nestle into her and whisper, “Your song is heard. Your people are dear to me, too. I will keep your secrets.”

Only a handful of people own cottages on the island, but there are many cottages of all different sizes that are available for rent. There is the Doll House, which is adorably tiny, all the way up to the Hill House, which has six bedrooms. The cottages have a cozy, vintage vibe that you usually only see in magazines meticulously curated by a dozen city people who may never have even been to an island. Treena and Krista are your island hostesses, and their bohemian loveliness is sprinkled over everything.

Aaron and I were able to spend a week on Eagle in August and we had, as always, the most wonderful time. The first several days were foggy, but warm, and the mist gave the island a dreamy New England feel. Then the weather changed and everything was sun-dappled and beautiful with seagulls singing in the sky and sailboats gliding through the sea. It’s hard to believe, but on an island with so few people, we had a very active social calendar. We had friends over for dinner, ate fresh lobster caught that day, and ended the evening with a sing-along. On another night, we went to Krista’s cabin for dinner and watched one of the best sunsets I have ever seen. Another night was a surprise cocktail party for Aaron’s moms’ anniversary. We were also invited to a lovely brunch, took long walks followed by long naps, had an impromptu lunch at the farmhouse where Krista whipped up the most delicious pasta with kale picked from the garden, read, and even made a short horror movie. We did everything and nothing and every second was grand. 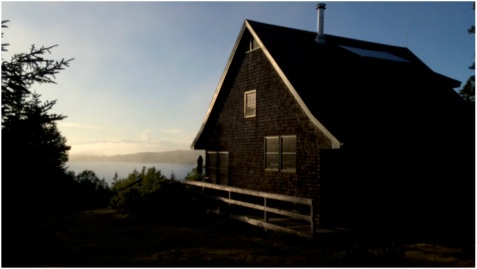 Several years ago, after visiting the island for more than 25 years, Aaron’s moms built a cottage on the island. Actually, they call it a cabbage—part cabin, part cottage. It’s warm and inviting and filled with laughter and music and has the most glorious view of the ocean. I love to sit out on the deck with the family, talking, drinking wine and watching the sunset. Even as we chat about this or that, we are each in the moment, recognizing the specialness of where we are, knowing how lucky we are to be able to sleep on an island—Eagle Island—and aware that none of us will ever be the same.

INSTRUCTIONS
Heat olive oil in large saucepan over medium low heat. Add kale and garlic and sauté until kale is soft, making sure not to brown garlic, about 7-10 minutes. Turn heat up to medium, add cherry tomatoes, olives, capers, red pepper flakes (if using) and Bragg’s Aminos and sauté 5 more minutes, until tomatoes are soft and heated through. Stir in basil and remove from heat.

Meanwhile, cook penne in lots of boiling, salted water until al dente. Drain pasta and return to pot. Add kale mixture and stir to combine. Add salt and pepper to taste. Sprinkle with the grated Parmesan and serve. Makes 6 servings.

If you’d like to rent a cabin on beautiful Eagle Island, please contact Treena and Krista at Eagle Island Rentals. 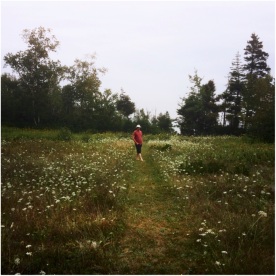 Picking Up Fresh Lobsters from the Dock

Aaron in the Doll House 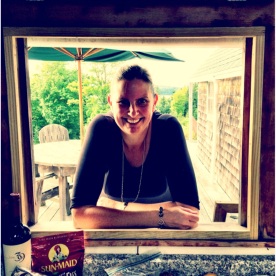 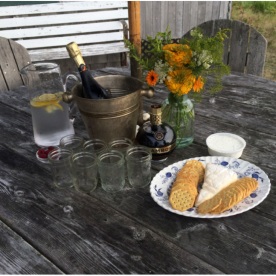 3 thoughts on “If Once You Have Slept on an Island”