A close friend of mine who makes her living as an “intuitive” told me several years ago that she believes I am the reincarnation of Thomas Jefferson. While I’m dubious about this, I’ve had some fun with it over the years, celebrating the special anniversaries in “my” life and reminding a number of my fellow Americans on July 4th of the debt they owe me: “You’re welcome.”

I have become highly attuned to all things Jeffersonian, so it wasn’t surprising that a bottle of sparkling wine with Thomas Jefferson’s signature and likeness on the label caught my eye when I was perusing the shelves of my local liquor store. What was surprising is that it’s produced by Gérard Bertrand, maker of the fine rosé in the lovely rose-shaped bottle that Kirsti gushed over in her very first post for The Swoon Society.

I bought a bottle of their Cuvée Thomas Jefferson, which Kirsti and I enjoyed with friends during the holidays. Everyone agreed that it was an exceptional crémant—elegant, fruity, and superbly balanced. I made a declaration that this was the perfect sparkling wine to ring in the New Year and resolved to get another bottle to toast the arrival of 2016.

The label states that this cuvée is a tribute to Thomas Jefferson, “the most French of American presidents,” who had a love of wine from the Limoux region of France, believed to be the birthplace of sparkling wine. Like Jefferson, Gérard Bertrand Crémant de Limoux Brut is both charming and a true ambassador of its homeland.

As we prepare to bid adieu to 2015, celebrate your inalienable right to life, liberty and the pursuit of Happy New Year by electing to purchase a bottle of this revolutionary wine (trust me, I know how to make a good purchase). Then, on New Year’s Eve, raise a glass to old friends, new beginnings, and independent spirits. You’re welcome.

Cuvée Thomas Jefferson can be obtained online from The Wine Club and Wine.com. To learn more about Gérard Bertrand Crémant de Limoux, visit the company’s website. 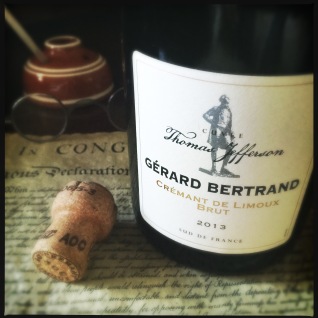 Thomas Jefferson was born 273 years ago today. Since we at The Swoon Society like any excuse to uncork a fine bottle of bubbly, we’ll be celebrating Life, Liberty and the pursuit of Happy Birthday by toasting our third President with a glass of his namesake sparkling wine. Join us, won’t you?