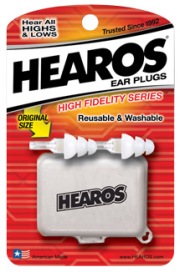 Sometimes I think I was born an old lady. When I was in high school, my idea of a wild Friday night was going to a restaurant with a small group of friends to discuss philosophy over tea and dessert. I did attend a number of concerts, but, regardless of the venue or how much I loved the band, I would invariably find myself asking, “Why does it have to be so LOUD?!”

I resigned myself to being hopelessly uncool until, while at a concert with a friend, we bumped into an acquaintance of his who was a music critic for a local publication. I thought she was the epitome of hip with her thrift store dress, steel-toed Doc Martens, and notepad to jot down thoughts on the performance. As the three of us stood close together, yelling to be heard over the music, I noticed that she was wearing ear plugs. It was a light bulb moment. If this impossibly cool chick could use ear plugs, so could I. 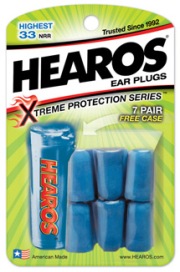 I’ve been carrying ear plugs in my purse ever since, and my go-to brand is Hearos. Over the years, they have come in handy in a multitude of unexpected situations. This past holiday season I saw The Hunger Games: Mockingjay – Part 2 and Star Wars: The Force Awakens, both of which had their share of explosions and gun battles. Listening in Dolby Surround might have been jarring if not for the Ultimate Softness Series from Hearos. When I got up close and personal with a 4th of July fireworks display, I went to the Xtreme Protection Series. On a trip to Paris, I shared a hotel room with a person who snores—loudly—but I slept Pretty in Pink with a pair of Women’s Sleep Ear Plugs.* Bonne nuit!

It’s one thing to take the edge off when sharing space with someone who is sawing logs in their sleep, but what about those times you want to hear every little nuance, as when listening to music? I find that ear plugs don’t prevent me from experiencing a full, rich sound. They simply filter out any harsh noises that might cause discomfort. I wore Hearos each time I went to see my friends’ rock band play live and I could pick out every note.

Even though Hearos makes a Rock N Roll Series, these ear plugs do block out quite a bit of sound, so I’ve only used them in a few unusual circumstances. My dog has allergies, and before I found an effective treatment, he would lick and chew his paws relentlessly, making a sound that I found intolerable. Rather than force him to wear the cone of shame, I’d pop in a pair of Rock N Roll Hearos and find myself in a cone of silence.

Ear plugs may not seem like a swoon-worthy topic to blog about, but protecting one’s hearing is definitely a Subject Worthy Of Our Notice. Music, in particular, is extremely important to me and I want to be able to listen and enjoy it throughout my lifetime, but many people don’t think about such things until it’s too late. Unless you’re Superman, you can’t turn back time, so consider getting yourself a pair (or two!) of ear plugs and let Hearos save the day—and your hearing.

Hearos can be found at CVS, Rite Aid, Walgreens, Target, and Walmart.

*I have to admit that this peeves me a little. Hearos offers pink ear plugs for women, but there are no ear plugs specifically made for men, unless it is implied that the Xtreme Protection Series, which is blue, is intended for male ears. Are Hearos actually Jokers? Do women’s and men’s ears differ in some way? (There is evidence that women have more sensitive hearing than men.) Are there not women who snore and keep their male companions awake? What if men want to sleep Boyish in Blue? Hearos, it’s time to pull the plug on silly gender stereotypes. I propose the gender-neutral Sleep Soundlessly Series.