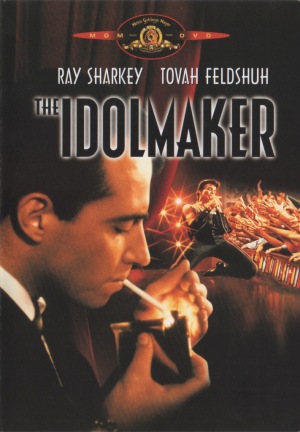 The weekend is almost here, which for many of you means heading home to Netflix and ch…ow, so whip up some pasta marinara, break out the Chianti, and beg, borrow, or buy the DVD* of this little-known gem to idle away an evening. The Idolmaker is the story of an Italian-American from Brooklyn named Vincent Vacarri who has the musical chops and songwriting talent to be a rock ‘n’ roll star, but lacks “the look,” so he mines a couple of diamonds in the rough and sets about polishing them into teen idols. In a kind of 1950s version of Cyrano de Bergerac, they perform his songs and speak, dress, and act as he dictates so that he can live vicariously (Vacarri-ously?) through them.

The film is loosely based on the life of Bob Marcucci, a rock promoter who discovered Frankie Avalon and Fabian, managing their careers and guiding them to stardom. Directed by Taylor Hackford (Mr. Helen Mirren) and starring Ray Sharkey in a Golden Globe-winning performance, the movie also features a young Peter Gallagher in his film debut and boasts a soundtrack of catchy original songs that will have you humming along with the musical numbers.

This poster from the film was taped to my sister’s bedroom door throughout the ’80s.

This movie holds a special place in my heart. Growing up, my sister Heidi and I were friends with a girl named Patty who lived across the street. When she and Heidi were in their early teens, Patty’s brother-in-law recruited them to be extras in a movie he was working on called…you guessed it…The Idolmaker. They spent a day acting the part of screaming audience members in a concert scene for the film, which I heard about for weeks afterwards. Forlorn at having been too young to join them, I hung on every detail.

When the film was released in November of 1980, Heidi and I saw it multiple times over the months that followed, excited about the fact that Patty could be seen during the performance of “However Dark the Night” wearing my mother’s red sweater. At home, we acted out the musical numbers and must have made our parents crazy with the constant repetition of the soundtrack LP on our turntable. I was already friends with Kirsti at the time and dragged her with me to see the movie on more than one occasion. She still has my handwritten lyrics to some of the songs, which I gave her to memorize.

Nowadays, Kirsti and I have a group of friends who trade off meeting at each other’s homes for dinner and a movie. The host gets to choose the film, and last month it was Kirsti’s turn. With my encouragement, she chose The Idolmaker. Despite receiving two Golden Globe nominations (Best Picture and Best Actor – Musical or Comedy) and one win, we rarely encounter anyone who has seen the film, so we weren’t surprised that most of the group hadn’t heard of it, but one person had not only seen the movie, he’d loved it enough to purchase TWO copies of the DVD. Even Kirsti’s husband, a camera assistant and film buff, hadn’t known about The Idolmaker until he’d met her, but he became a fan after finally viewing it with the group.

Much like the St. Francis Dam disaster, The Idolmaker was an important part of my childhood that seems to have been lost to history, but it’s worth reviving. Kirsti and I agree that, after the passage of more than three decades, the film holds up. It’s still as thoroughly entertaining to us as adults as it was when we were tweens, so if you’re stuck indoors this weekend with some idle time, make time for The Idolmaker and you’ll be seeing the stars.

The DVD of The Idolmaker can be purchased from Amazon, Barnes & Noble, and stores like Best Buy, Fry’s, and Wal-Mart.

*The Idolmaker is not available for streaming, so unless you can find it for sale at a brick-and-mortar store, you’ll have to purchase it online or order it from Netflix on DVD and idle away a few days until it’s delivered. Until then, watch the trailer.

2 thoughts on “Idol Away an Evening”