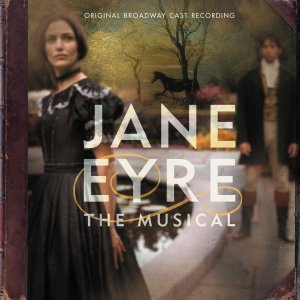 Reading Jane Eyre in high school had me racing to English class each day to discuss the brooding Mr. Rochester and the mystery in his attic. I fell hard for gothic romance and subsequently saw every iteration of the story on film, which is why a notice about a pre-Broadway tryout of the musical version at the La Jolla Playhouse caught my eye in the summer of 1999. I recruited My Crazy Friend Marianne™ to drive with me from L.A. to San Diego to see the show, and was later able to catch it on Broadway in 2001 during its brief run.

Since then, I’ve followed the career of composer and lyricist Paul Gordon, but I somehow failed to hear about his production of Daddy Long Legs until mere weeks after it had finished its premiere run at the Rubicon Theatre in Ventura County, just a short drive north of Los Angeles. Disappointed at this missed opportunity, I consoled myself by listening to the delightful cast recording, which presents the story in such a way that I was able to clearly envision the show.

Until reading about the musical, I’d never heard of the book Daddy Long Legs by Jean Webster or the 1955 film of the same name starring Fred Astaire and Leslie Caron. The book is an epistolary novel, told through a series of letters, and the musical takes advantage of this device. Set in early 1900s New England, it tells the story of Jerusha Abbott, “The Oldest Orphan in the John Grier Home,” a trustee of which chooses to be her benefactor and send her to school for a proper education. Though she’s never met him, she sees his long shadow cast by the lights of a car as he’s leaving the home and nicknames him Daddy Long Legs. His one requirement is that she write to him regularly with updates about her progress, and it is through these letters that her intelligence, humor, and innocent wonder begin to chip away at his cynicism. While she assumes that he is an older gentlemen, he’s actually a young man who is starting to develop feelings for her.

Daddy Long Legs is one of the sweetest, most charming musicals I’ve ever heard. Sung entirely by the two main characters, the inventive score is brought to life by the expressive voices of stars Megan McGinnis and Paul Alexander Nolan (Robert Adelman Hancock in the original production). And, like a Progressive Era You’ve Got Mail (a Swoon Society favorite), the letter-writing format heightens the anticipation as it builds to the big reveal. Unfortunately, despite being nominated for three Outer Critics Circle Awards (Outstanding New Off-Broadway Musical, Book of a Musical, and New Score) and two Drama Desk Awards (Outstanding Musical and Score), the show will close its Off-Broadway run on June 6th after less than nine months.

It seems I’m always just two steps behind these Long Legs, first missing the original production in my own backyard, then neglecting to read about the livestream event this past December until shortly after it had come and gone. Now the show will close in less than a week, dashing any hope of seeing it on Broadway, but the music lives on. Perhaps, like other critical darlings that have closed after short runs (remember Side Show?), it will find new life in regional theatres and I’ll have the opportunity to see it someday.

Until then, anyone can pop in the CD or download the Original Off-Broadway Cast Recording and swoon over this lyrical love letter. Even though the current production is coming to an end, I believe this show has legs and will continue to weave its magic for a long time to come.

*This recording is slightly different from the Off-Broadway version and contains my favorite verse from the show, which was cut from the subsequent production:

“I see my name upon the page,
She writes of me in such detail.
Am I just fostering her education,
Or reading someone else’s mail?”