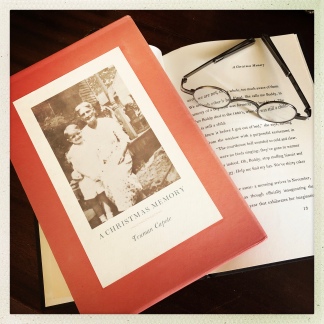 One December afternoon many years ago, my high school English teacher, Miss Weakland, announced that she would be reading a story aloud for the entire class period. Miss Weakland was my favorite teacher, in part because she liked to intersperse drilling grammar and parsing Faulkner with days like these where the class could relax and enjoy some literary entertainment. That same year, she caused a minor stir when she decided to screen Franco Zeffirelli’s Romeo and Juliet. There’s some brief nudity in the film, so the administration of our private Catholic school required that students bring a signed permission slip from their parents in order to watch. This created an awkward anticipation during the screening, which grew in intensity until one student let out a loud wolf whistle when Leonard Whiting’s ass-ets finally made an appearance, breaking the tension amid gales of laughter.

But this day’s presentation was free from controversy. Miss Weakland would be reading A Christmas Memory by Truman Capote. I’d heard, of course, about the famous author of Breakfast at Tiffany’s and In Cold Blood, but hadn’t read this short story about a memorable holiday from his youth or seen the 1966 film starring Geraldine Page. “Imagine a morning in late November,” it begins. Just two paragraphs later, I was already drawn in by the time the author’s elderly, childlike cousin and best friend exclaimed that “it’s fruitcake weather!”

I was so charmed and deeply moved by this tale of innocent pleasures, selfless giving, true friendship, and pure love that I went on and on about it when I got home from school. That year, my mother gifted me with a special edition of the book for Christmas. I’d also told my own older (though not elderly) cousin and friend—a bibliophile who later became a librarian—about the joy and wonder of first hearing this story read aloud, so she enthusiastically suggested we hold a reading at our family’s Christmas celebration the following year, but it didn’t go over as well as we’d hoped. She’d read the story, but we hadn’t read the room—a captive audience of AP English students it was not.

Since then, I’ve pulled the slim volume from its slipcase each Christmas to reread on my own, marveling that it still has the power to bring tears of joy and sadness to my eyes, even though, after all this time, it is practically committed to memory.

I recently learned that Miss Weakland passed away exactly one month before Christmas…on a late November day that, perhaps, signaled the start of fruitcake weather. She will forever remain a special part of my Christmas memories.

Incredibly, an audio version of A Christmas Memory is not available from Audible, but Barnes & Noble carries an edition of the book that includes a companion CD featuring the story read by Celeste Holm. Or, start a new tradition this year by downloading the ebook and reading it aloud at your own holiday celebration. Just make sure to read the room first.

One thought on “Committed to Memory”