Neither Kirsti nor I has posted anything for The Swoon Society in more than two months due to, among other things, a number of milestone birthdays in our circle of family and friends, a graduation, out-of-town guests, an overscheduled social calendar (Kirsti), general laziness (me), and simple inertia—a blog at rest tends to stay at rest. But I am suspending this spontaneous sabbatical to celebrate the birthday of someone who literally turned swooning into an art form: romance cover illustrator Elaine Duillo.

Classic cover art collection or cry for help – my chronic case of “Elainia.”

Before retiring in 2003 from an illustrious (emphasis on “lust”) 44-year career, Elaine’s artwork graced more than 1,000 book covers, ranging from science fiction and mysteries to Gothics and—most notably—romance. I discovered her cover art as a teen, when I developed an interest in historical romantic fiction while babysitting, of all things. Some mothers would leave their books lying around the house and I’d read them to pass the time while the kids slept. Among titles by authors such as Shirlee Busbee, Johanna Lindsey, Christina Skye, and Bertrice Small, I noticed that certain covers were particularly eye-catching, with vibrant colors, incredible detail, beautiful period clothing, and scenes from the story playing out in the periphery around a couple in a classic “clinch” pose.

Whenever I came across this singular style, I’d flip to the back of the title page to see the words “Cover art by Elaine Duillo.” If there was no attribution, a quick scan for her swirling signature hidden within the painting would confirm the identity of the artist. And the original was an actual painting, despite the fact that her photoreal style could almost fool the eye into thinking it was an embellished photograph.

In the mid-1980s, Elaine hired an Italian fashion model named Fabio Lanzoni to pose for one of her illustrations and launched him into superstardom as a romance cover model. After that, her covers were in high demand, but, while their prolific partnership was a huge success, I was more likely to swoon over the flawless features, gorgeous gowns, daring décolletage, and down-to-there hair of her heroines.* Forget the hunky hero, I wanted to BE one of these bombshells. While my friends were looking to the covers of Seventeen, Vogue, and Harper’s Bazaar for their unrealistic beauty standards, I was looking to the covers of Angel in Scarlet, Defy Not the Heart, and Hellion (one of my favorite Duillo illustrations, with no bare-chested beefcake in sight).

Shortly after college, I got a job at a romance audiobook company, which had recently moved into new, spartan offices. I’d read that Elaine Duillo was offering some of her romance covers for sale as posters, so when I saw her contact information in our Rolodex (squee!), I wrote to her. After introducing myself and fangirling a bit, I explained our situation and joked, “We’re looking at bare walls when we’d rather be looking at bare chests.” She responded with a sweet note and an order form featuring four of her illustrations. We didn’t end up buying any of her art for the office, but I later managed to score a promotional Johanna Lindsey poster featuring one of Elaine’s paintings surrounded by several of her covers.

While I viewed many of these types of illustrations (including works by Robert McGinnis and Pino Daeni) as fine art, I also enjoyed the over-the-top campiness of others, but some readers were embarrassed to be seen in public with these books, so publishers came up with the “step-back”: an innocuous front cover that could be turned back to reveal the passionate pose beneath. Eventually, changing tastes in the industry led to the evolution of cover art away from the kind of fanciful and lushly romantic images for which artists like Elaine Duillo were known. 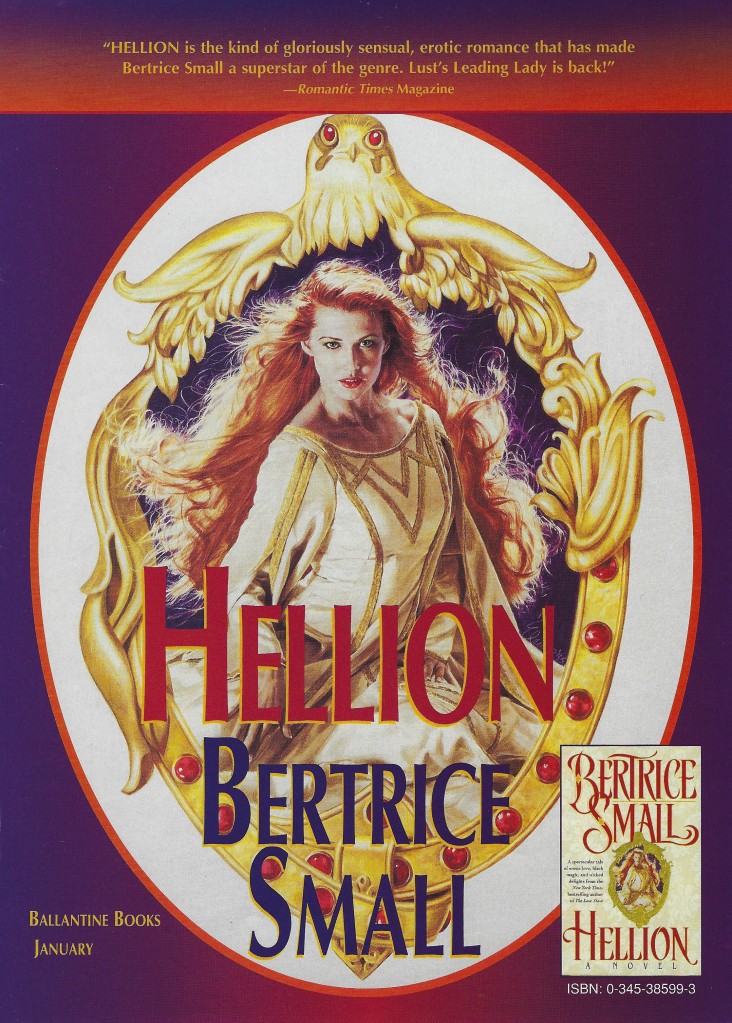 For many years, illustrators—especially those in the field of romance cover art—did not receive the respect or recognition they were due, but in June of 2003, the prestigious Society of Illustrators in New York presented Elaine Duillo with a Lifetime Achievement Award and inducted her into its Hall of Fame, an honor worthy of “The Queen of Romance Cover Art.”

Over the years, I’ve amassed quite a cache of covers, calendars, articles, advertisements, and more relating to Elaine Duillo and her art, including the premier issue of Imaginings, a short-lived newsletter celebrating “The Art of Romance,” and Book 1 of Pro-Illustration: A Guide to Professional Techniques. I used to regularly visit a secondhand bookstore in my area that sold romance paperbacks for just a dollar or two, including several of the so-called “bodice rippers” that Elaine illustrated. Like so many bookstores in recent years, it was forced to close, so I’m glad I stocked up. You know, for the pictures. That’s my cover story, and I’m sticking to it!

*When I was taking a class on psychology in advertising years ago, I read of a study in which researchers tracked subjects’ eye movements as they were shown pictures of a man and woman in a suggestive pose, finding that males and females both tended to look at the woman first and longest.

Leave a Reply to The Swoon Society Cancel reply