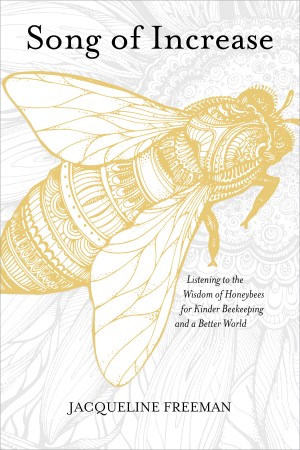 A few months ago, I was baffled when my boss gave me a book about beekeeping for my birthday. While I enjoy honey and have always had a healthy respect for bees, my interest has never gone beyond that, so I wasn’t sure how to react to this unexpected gift. But my boss has an otherworldly knowing and assured me that, once I perused these pages, I’d never look at bees or the natural world in the same way again. As usual, she was right.

In Song of Increase, author Jacqueline Freeman tells the story of how she became an accidental beekeeper when a friend offered her some bees to tend on her farm in the Pacific Northwest. Having no prior knowledge about beekeeping, but possessing a keen intuitive sense, Jacqueline sat quietly next to the hive for a time to simply observe. As she did, she began to experience a feeling of joy emanating from the bees while they went about their work.

Over time, as she learned the rhythms and routines of the hive, she started tuning more and more to the bees’ frequency and began receiving direct and detailed messages about the inner workings of the colony, its vital purpose on the planet, the magic of the hive mind, and the various songs the bees sing as they carry out their tasks, including a celebratory anthem of abundance known as the “song of increase.” 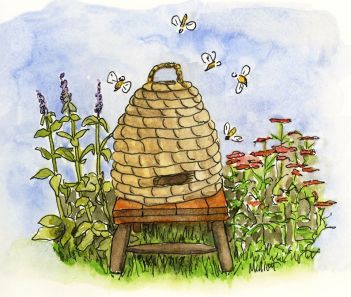 Skeptics and cynics may doubt her story or even question her sanity, but these insights have given her a unique perspective on how to care for a colony of bees. Much of what she learned runs counter to the practices of conventional beekeeping, and this “bee-centric” method—focusing on the bees’ needs rather than our own needs from the bees—restores the sacred trust between human and hive, helping both to thrive.

This book gave me a glimpse into a world of industry, harmony, and beauty that I’d never fully appreciated or understood before. The eloquence of the bees is expressed in both action and awareness, as they comprehend the interconnectedness of all things and embrace their role within the whole. We have much to learn from them.

I don’t think I’m up to the practice of beekeeping—yet—but now I’m more likely to pause and acknowledge the bees in my own backyard, taking a moment to radiate gratitude for their tireless work and wisdom. And in the midst of a rainy winter week here in Southern California, I’m already dreaming of the bee-friendly flowers I plan to plant in the spring, because a garden in full bloom and buzzing with activity—that’s the bee’s knees.

Song of Increase is also available on audio as read by the author. You can learn more about Jacqueline Freeman and her bee-centric approach to beekeeping at Spirit Bee.

Whatever is the opposite of a green thumb (a black pinkie?), I have it. I’d love to surround myself with live plants and flowers in my home, but, like those people who have trouble growing long hair or nails, I simply can’t grow them. They eventually give up and die in my presence. It’s a curse (in fact, my nickname rhymes with cursed, but that’s another story).

Purchasing cut flowers from a florist or market is an option, but can be pricey to indulge in on a regular basis. Plus, I always forget to change the water until the putrid funk of decomposing greenery escapes the confines of the vase, nearly causing me to swoon (and not in the good way). But the alternative—artificial plants and flowers—is so joyless. Even high-quality versions can gather dust and fade with time, and they won’t decompose in a vase…or a landfill. 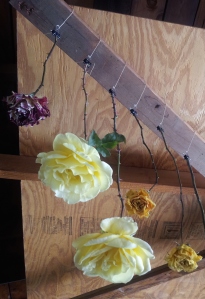 The solution: dried flowers. They’re already dead, so I can’t kill them. They’re already faded, so they won’t change with time. And if they gather dust, I can throw them in the compost bin with a clear conscience.

There are a number of rose bushes in my yard that are far enough away from my aura that they haven’t been affected by the curse. When they’re in bloom, I like to cut the best specimens for drying. I hang them from the rafters in my garage, but you can hang them in a closet, a laundry room, or anywhere that’s relatively warm and dry where they can be suspended upside down and undisturbed for at least two weeks.

When I first began drying flowers, I tied them with twine, but some of the stems slipped their moorings as they shrunk. I came up with a quick fix by threading the twine through the handles of small binder clips before tying them to the rafters. After that, it was an easy task to hang the stems, and the clips held tight throughout the drying process.

Since the flowers in my yard that dry well are limited to roses, and since I don’t have much of a knack for arranging bouquets (my horticultural handicaps are legion), I appreciate a vessel that does most of the work for me. I snagged a Wedgwood for Williamsburg Restoration five-finger vase on eBay, but the Williamsburg Marketplace sells a similar version, along with beautiful tulipieres that also make flower arranging idiot-proof. 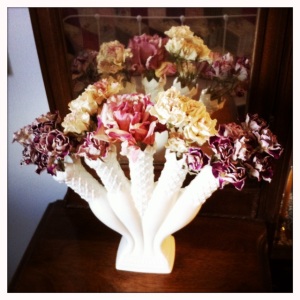 Waiting until after the roses have dried to remove the thorns makes snapping them off a snap. I also removed the leaves, because I was going for a flowers-only theme, but you can use your own creative license. I grouped bunches of blooms in similar hues, arranged them in a symmetrical fashion, and put them in each “finger” of the vase, working from the center outwards…et voilà! I have a simple, yet swoon-worthy arrangement that requires no more care than occasionally blowing off the dust with a hairdryer.

With spring here and summer on its way, I’ll have plenty of blooms to dry and arrange for the next few months. I may even attempt something more ambitious without the crutch of a special vase. Who knows? It might just blossom into a new talent.

Binder clips can be purchased at Staples and Office Depot.