Neither Kirsti nor I has posted anything for The Swoon Society in more than two months due to, among other things, a number of milestone birthdays in our circle of family and friends, a graduation, out-of-town guests, an overscheduled social calendar (Kirsti), general laziness (me), and simple inertia—a blog at rest tends to stay at rest. But I am suspending this spontaneous sabbatical to celebrate the birthday of someone who literally turned swooning into an art form: romance cover illustrator Elaine Duillo. 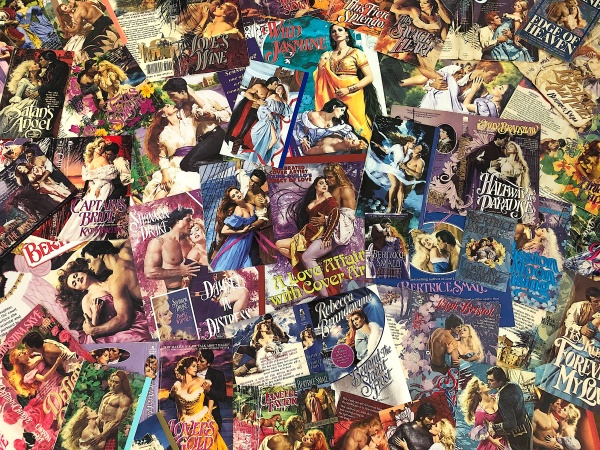 Classic cover art collection or cry for help – my chronic case of “Elainia.”

Before retiring in 2003 from an illustrious (emphasis on lust) 44-year career, Elaine’s artwork graced more than 1,000 book covers, ranging from science fiction and mysteries to Gothics and—most notably—romance. I discovered her cover art as a teen, when I developed an interest in historical romantic fiction while babysitting, of all things. Some mothers would leave their books lying around the house and I’d read them to pass the time while the kids slept. Among titles by authors such as Shirlee Busbee, Johanna Lindsey, Christina Skye, and Bertrice Small, I noticed that certain covers were particularly eye-catching, with vibrant colors, incredible detail, beautiful period clothing, and scenes from the story playing out in the periphery around a couple in a classic “clinch” pose. Whenever I came across this singular style, I’d flip to the back of the title page to see the words “Cover art by Elaine Duillo.” If there was no attribution, a quick scan for her swirling signature hidden within the painting would confirm the identity of the artist. And the original was an actual painting, despite the fact that her photoreal style could almost fool the eye into thinking it was an embellished photograph.

In the mid-1980s, Elaine hired an Italian fashion model named Fabio Lanzoni to pose for one of her illustrations and launched him into superstardom as a romance cover model. After that, her covers were in high demand, but—while their prolific partnership was a huge success—I was more likely to swoon over the flawless features, gorgeous gowns, daring décolletage, and down-to-there hair of her heroines.* Forget the hunky hero, I wanted to be one of these bombshells. While my friends were looking to the covers of Seventeen, Vogue, and Harper’s Bazaar for their unrealistic beauty standards, I was looking to the covers of Angel in Scarlet, Defy Not the Heart, and Hellion (one of my favorite Duillo illustrations, with no bare-chested beefcake in sight). 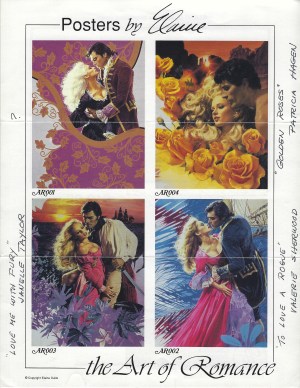 Shortly after college, I got a job at a romance audiobook company, which had recently moved into new, spartan offices. I’d read that Elaine Duillo was offering some of her romance covers for sale as posters, so when I saw her contact information in our Rolodex (squee!), I wrote to her. After introducing myself and fangirling a bit, I explained our situation and joked, “We’re looking at bare walls when we’d rather be looking at bare chests.” She responded with a sweet note and an order form featuring four of her illustrations. We didn’t end up buying any of her art for the office, but I later managed to score a promotional Johanna Lindsey poster featuring one of Elaine’s paintings surrounded by several of her covers.

While I viewed many of these types of illustrations (including works by Robert McGinnis and Pino Daeni) as fine art, I also enjoyed the over-the-top campiness of others, but some readers were embarrassed to be seen in public with these books, so publishers came up with the “step-back”: an innocuous front cover that could be turned back to reveal the passionate pose beneath. Eventually, changing tastes in the industry led to the evolution of cover art away from the kind of fanciful and lushly romantic images for which artists like Elaine Duillo were known. 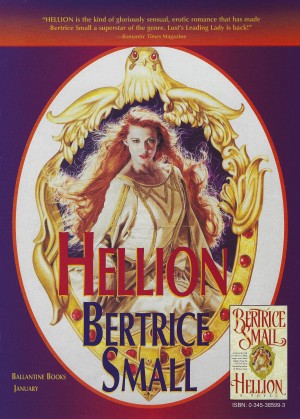 For many years, illustrators—especially those in the field of romance cover art—did not receive the respect or recognition they were due, but in June of 2003, the prestigious Society of Illustrators in New York presented Elaine Duillo with a Lifetime Achievement Award and inducted her into its Hall of Fame, an honor worthy of “The Queen of Romance Cover Art.”

Over the years, I’ve amassed quite a cache of covers, calendars, articles, advertisements, and more relating to Elaine Duillo and her art, including the premier issue of Imaginings, a short-lived newsletter celebrating “The Art of Romance,” and Book 1 of Pro-Illustration: A Guide to Professional Techniques. I used to regularly visit a secondhand bookstore in my area that sold romance paperbacks for just a dollar or two, including many of the so-called “bodice rippers” that Elaine illustrated. Like so many bookstores in recent years, it was forced to close, so I’m glad I stocked up. You know, for the pictures. That’s my cover story, and I’m sticking to it!

*When I was taking a class on psychology in advertising years ago, I read of a study in which researchers tracked subjects’ eye movements as they were shown pictures of a man and woman in a suggestive pose, finding that males and females both tended to look at the woman first and longest.

Kirsti and I have not written much for the blog this summer, and over the past month I haven’t felt like swooning over anything except the oppressive heat, but I’ve been roused today from my self-imposed sabbatical to commemorate, of all things, an assassination.

On September 10, 1898—120 years ago today—Empress Elisabeth of Austria, known familiarly as “Sisi” (i.e. sissy), was stabbed in the chest by a disgruntled anarchist (is there any other kind?) as she was about to board a steamship in Geneva, Switzerland. In the chaos of the attack, neither she nor her lady-in-waiting realized what had happened until Sisi collapsed and was carried aboard ship, where her tight corset laces, which had been stanching the flow of blood, were cut open to help her breathe…and that was all she wrote. 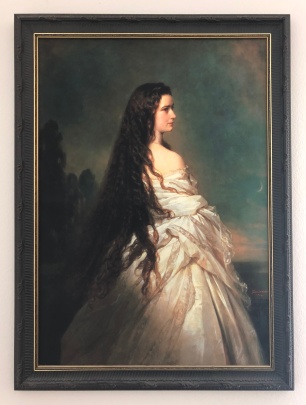 Years ago, when I’d grown my hair below my waist and was in thrall to trailing tresses, I encountered a painting of Sisi by famed royal portraitist Franz Xaver Winterhalter and developed an adult case of Princess Syndrome. In the painting, Sisi’s famously long, thick hair is unbound and flowing down her back while one creamy shoulder is exposed by the drape of a sumptuous gown. I was enchanted, and thus began my fascination with this complicated consort.

Sisi’s marriage to Franz Joseph I of Austria initially seemed like a fairytale. His mother had arranged for him to marry his cousin, Sisi’s older sister Helene, but when then-Princess Elisabeth joined Helene and their mother to meet the young Emperor for the first time, he only had eyes for Sisi. In a rare display of defiance against his domineering mother, Franz Joseph declared that he’d marry none but Elisabeth, and their betrothal was announced five days later. 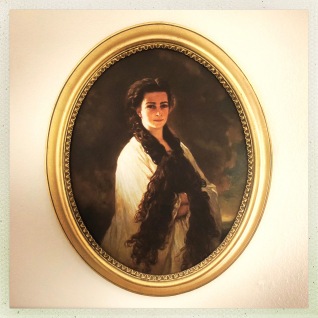 This Winterhalter portrait from 1864 was Franz Joseph’s favorite painting of his wife.

The courtship and marriage were highly romanticized in the 1955 film Sissi,* but real life did not lead to a happily ever after. From the beginning, Sisi chafed at the strictures of court life, compounded by the open disdain of her overbearing mother-in-law, who took charge of raising Sisi’s two daughters and is rumored to have threatened her over not producing a male heir. By the time Sisi gave birth to a son, her first child had already died of illness, and she’d fallen into a depression that plagued her throughout her life.

Her misery manifested as a number of (likely) psychosomatic ailments and an obsession with weight and beauty involving extreme exercise and fasting regimens, daily cold showers, and hours spent brushing and styling her hair. But despite her neuroses and melancholy, Sisi was intelligent and curious, taking delight in defying convention and shocking those in her stifling milieu. She spoke several languages, was an avid reader, and had a passionate thirst for knowledge that led to wanderlust in her later years, but the death of her only son at the age of 30 in a murder-suicide with his mistress was the final blow from which she never emotionally recovered. 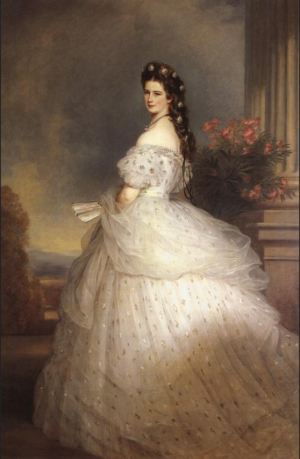 During her 44 years as Empress of Austria, Sisi found periods of solace by visiting Hungary, of which she was also queen through her marriage, and showed a clear preference for that country and its people. While this angered many Austrians, she remained a subject of fascination and was lauded for her charitable works and sympathy with the common man. When she was assassinated at age 60, Sisi was deeply mourned throughout the Austro-Hungarian Empire, an area that continues to make a fuss over her to this day.†

Kirsti traveled to Vienna a few years ago, where she visited the Sisi Museum in the Hofburg Imperial Palace and scored me several choice items of “Sisiana,” including syrup and jelly, tea and truffles, and a beautiful reproduction of one of the crystal starburst hair pins that adorn Sisi’s coiffure in Winterhalter’s most famous portrait of her. I have also ordered Sisi-themed chocolates (surprisingly delicious) and sparkling wine from Austria that arrived on my doorstep faster than many orders I’ve placed in the U.S. 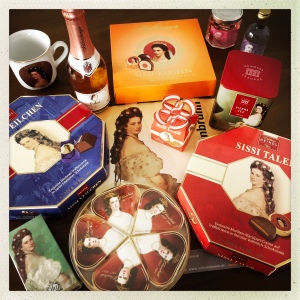 While I enjoy using these items and admiring Sisi’s portrait on my wall (a gift from my cousin), I try not to lose sight of an enduring lesson. The irony and tragedy of celebrating Sisi for her beauty is that she derived her self-worth from her looks, which were doomed to fade over time. And though it would be easy to dismiss her as a pampered, vain royal who cared only about her appearance and didn’t appreciate the good fortune her status afforded, her story is a reminder that beauty, money, and position are no protection against adversity and heartache.

After learning about the lady beyond the canvas, I no longer have Princess Syndrome. People from all walks of life can experience tragedy and self-doubt, and every woman should know that she’s valued for more than just physical attractiveness, her spouse, or a title. The freedom to pursue your own purpose is a privilege, and it turns out that marrying into royalty is not all it’s cracked up to be (I’m looking at you, Hallmark Channel!).

But I still really love that hair.‡

Sissi* chocolates and sparkling wine can be ordered online from Austrian Shop, but be aware that availability is often unreliable.

*Sisi’s nickname is often misspelled as Sissi in film, literature, the performing arts, retail, and various other areas.

†Sisi might remind you of another beautiful and beloved princess whose unhappiness with her marriage, royal restrictions, and public scrutiny led to depression, low self-esteem, and an eating disorder, but also sparked a streak of defiance, an interest in philanthropic endeavors, and an affinity for the common people that led to an outpouring of grief upon her untimely death.