I rarely consume dairy milk, but I wasn’t crazy about most of the alternatives until I discovered the wonders of coconut milk. I’m not talking about the highly diluted version sold in Tetra Paks that you can find on store shelves next to the almond, soy, and hemp milks. I mean the thick, creamy coconut milk sold in cans that is located in the ethnic foods section of most supermarkets.

I found my way to canned coconut milk when I was looking for a natural, non-dairy creamer to use in my morning coffee and brewed chocolate. I like to control the amount and type of sweetener I add, but all of the soy and coconut creamers I’ve come across contain sugar, and the milk alternatives are too light to replace creamer. When I decided to try canned coconut milk, I went…well…coconuts! 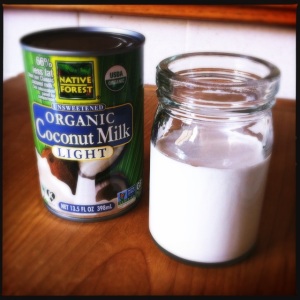 Over the years, I’ve tried many different brands and grades of coconut milk, and Native Forest is, in my opinion, the best of the bunch. It comes in three varieties, but I’ve only seen the Classic and Light versions at my local market. The Light Coconut Milk has a beautifully smooth texture and a mild, sweet flavor that mixes well with coffee and tea. It can be thinned with water and poured over cereal or used in any recipe that calls for milk. I use the full-fat Classic Coconut Milk to make non-dairy ice cream and whipped coconut cream. Melt a bar of dark chocolate in a pan of hot coconut milk for the most swoon-worthy cup of hot chocolate you’ve ever tasted.

All of Native Forest’s coconut milks are organic and come packaged in BPA-free cans. Once opened, the milk should be consumed within four days, but I get around this by freezing it in ice cube trays. I just pop a few cubes out every couple of days and let them thaw in the fridge until I need them. The cans are shelf-stable for years, so I always keep several on hand.

This past week, I saw Native Forest coconut milk at Trader Joe’s, where they were selling it for half the price I normally pay. Previously, I’d only found the brand at health food stores and high-end markets, so I asked an employee about it. He said that Trader Joe’s is repackaging its own coconut milk and sourced the Native Forest brand to offer as an alternative in the meantime. I have no idea how long the situation will last, so I suggest you look for this fantastic deal and milk it for all it’s worth.

Native Forest coconut milk is sold at Whole Foods and some health food stores. It is available at Trader Joe’s for a limited time.

Native Forest now offers a convenient Coconut Milk Powder. Just like their canned coconut milks, the powdered version is vegan and gluten-free. It dissolves instantly in hot water, making it ideal for use as a non-dairy creamer. It also comes in a resealable pouch that doesn’t need to be refrigerated, so it’s great for travel or if (like me) you don’t have a fridge at work. Mix with cocoa powder and a little xylitol for a quick and easy sugar-free hot chocolate. That may not sound appealing in the midst of this heat wave, but fall will be here before you know it, so enjoy your summer vacation and be sure to take the powder when you take a powder.

Native Forest Coconut Milk can be purchased at Sprouts, the stores mentioned above, or online from Amazon, Edward & Sons, and Thrive Market.

Several years ago, I was introduced to the concept of brewing chocolate when I read about Cabaret Brewed Chocolate in a magazine. Seduced by the description of brewed, whole, raw cacao beans blended with evaporated cane juice to produce a thick liquid the consistency of maple syrup, I quickly purchased a jar online. The label recommended mixing two teaspoons of the syrup in one cup of hot water as an alternative to coffee, tea, or hot chocolate, adding milk, if desired. I prepared a cup and was…disappointed.

My favorite online review of the product listed one of the cons as, “Misleading expectation of decadence.” Many reviewers commented that the brew tasted like weak chocolate tea, instead of the rich cocoa flavor they were expecting. To my palate, it was surprisingly tangy with a slight chocolate overtone. I put it on a shelf and didn’t touch it for a couple of weeks, until one night when I was craving something sweet and made another cup, doubling the amount of syrup and adding a little milk. This time, I enjoyed it and ended up drinking it over the next few weeks until the jar was empty. A while later, I decided to place an order again when I found that the product had been discontinued. My adventures with brewed chocolate were over almost before they had begun.

Years later, my friend Ray—a fellow chocolate enthusiast—alerted me to a new brewed chocolate product he’d discovered called Choffy. Following a similar process as that for producing coffee, cacao beans are roasted, ground, and sealed in 12 oz. bags. The product looks and brews just like coffee. To prepare Choffy, the company recommends using a French press, but any method for making a cup or pot of coffee will get the job done.

Now, I know why they chose the name, obviously: Chocolate + Coffee = Choffee → Choffy. But that word. It’s a lot to take. However, nothing so trivial as word aversion will deter a true chocoholic searching for a new angle, so I ordered a bag. This time, with no false illusions about brewed chocolate, I liked it. That tangy quality is still there, but the chocolate flavor is much more pronounced. I also enjoy the flexibility of making a weak or strong brew and choosing my own sweetener. I have not yet developed an appreciation for “black” Choffy, so I usually add milk and always sweeten the pot (or cup).

Choffy comes in five varieties: Ivory Coast, IC Dark, La Española, Volta, and Volta Dark. Ivory Coast is the original and classic Choffy, while La Española is recommended for coffee lovers. I prefer the IC Dark for its bold flavor, although I usually purchase a variety set containing all three grinds. Volta and Volta Dark are Choffy’s newest flavors, and I haven’t had the opportunity to try them yet, but they are described as “exceptionally rich” and smooth. Whichever bag I grab, the first thing I do before making a cup is to stick my face in the opening and inhale. The heady aroma of roasted, ground cacao beans never fails to give me a lift.

I’m not gonna lie to you, though: brewed chocolate is an acquired taste. At least, it was for me. It doesn’t have the familiar flavor of hot chocolate, nor does it taste anything like coffee. So what makes it a Sip Worthy Of Our Notice? For one thing, it has an intriguing and unusual profile for those who desire something different. The theobromine in cacao is a gentler stimulant than caffeine, so it makes a nice alternative to coffee for people who want to reduce their intake. As a nightcap, the brew is lighter than hot cocoa and satisfies a chocolate craving without adding a lot of calories.

If you’re a chocolate lover, you’ll definitely want to add brewed chocolate to your repertoire. You may not switch to “Choffy” as your safe word, but if you want to make the switch from coffee, tea, or hot chocolate to a stimulating substitute, Choffy is a safe bet.

In addition to brewed chocolate, the company sells its own set of French presses. Choffy can also be found at various retail locations using this map.