I grew up in the San Fernando Valley. The summers in the valley were so hot. Like, totally. But for a kid in the late ’70s and early ’80s, they were also magic. Our house was the one where all the neighborhood kids gathered. Sometimes it was for a game of TV tag, other times it was to trade baseball cards or run through the sprinklers. We could stay out until the streetlights came on—a wild pack riding skateboards—or go to the liquor store to buy as many Watermelon Stix as we could with the change from the bottom of our Moms’ purses. The days were long and time was abundant and the break from school felt like forever.

When I think back on that time, it’s the delicious smells of summer I remember most—fresh cut grass, the strong piney scent of the juniper bushes we built our forts in, and the lemons, big as softballs, in my next door neighbor’s yard.

Our neighbors had three lemon trees in their backyard, with a swing set right in back of them. I spent a lot of time there with Claire, who was the same age as me. We would swing for hours and sing oldies, but goodies, that we learned from playing our parents’ records. I learned what the “F” word meant, sitting on one of the swings, and we laughed uncomfortably at the Wacky Pack cards given to us by boys. The smell of the lemon blossoms would fill our noses with the fragrance of sun and citrus and we would try to touch the leaves of the trees with our feet while singing “It’s my party and I’ll cry if I want to,” the swing set squeaking in time, “You would cry too, if it happened to you.”

Every couple of days, we’d pick a bunch of lemons and make lemonade to sell at our sidewalk stand. We never really sold much lemonade, but I loved the ritual of making it—picking the lemons, washing them, cutting them, juicing them, adding water, the whooshing sound of the sugar being poured into the pitcher, the few drops of red food coloring to make it pink, stirring it and, of course, drinking it. When you’re a kid, you take everything for granted, but it was never lost on me that the taste of that lemonade on a valley-hot summer day was perfection.

I recently moved back to the San Fernando Valley. Feeling wistful for those days, I went on a lemonade-making binge. Lavender lemonade, watermelon lemonade, cucumber lemonade…they were all great, but my favorite was raspberry lemonade. Simple, naturally pink. And if a splash of gin found its way into my glass, awesome!

I still love the smell of fresh lemons from a backyard tree and I still suck in my breath with delight when the sugar whooshes into the pitcher—and it still tastes exactly like it did when I was a kid. I wish I had a swing set in my back yard. I do have that Lesley Gore record, though. I think I might put it on, maybe even say the “F” word, and think more about those magical hot summer days. Like, totally.

Purée the raspberries in a blender and strain through a fine sieve into a pitcher. Add the remaining ingredients and whisk together until the sugar dissolves, enjoying the whooshing sound the sugar makes as it’s poured into the pitcher. Serve over ice. Taste summer. 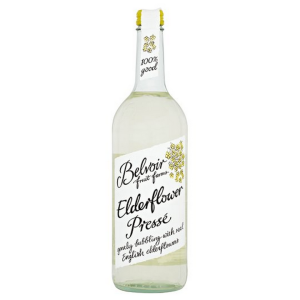 On a trip to England in 2002, I was swooning over one of the magnificent gardens in Cornwall when I stopped by a concession stand for a drink and purchased a bottle of something I’d never encountered before: elderflower pressé. I was instantly smitten with its light, floral flavor that had the refreshing astringency of citrus. Although I saw this delightful beverage in several places over the course of my trip, I searched in vain for a bottle once I’d returned home to the United States. 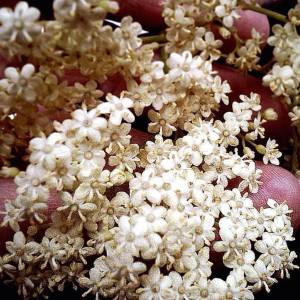 Elderflowers bloom in lacy clusters of white or pale cream blossoms and have traditionally been used in Central and Eastern Europe to flavor regional desserts and drinks. Pressé is a French word meaning “squeezed.” The elderflowers are steeped, then pressed to extract as much of the flavor as possible. Most bottled pressé drinks I’ve seen on the market are carbonated and are often labeled as “sparkling pressé”. Translation: elderflower pressé = pressed elderflower soda.

Years after my trip, I was thrilled to discover Belvoir Elderflower Pressé for sale at my local World Market. From that day forward, I routinely had a bottle chilling in my fridge. I began to take it for granted until one day when I couldn’t find it on the shelf and learned that the store was no longer going to carry it. Fortunately, my devastation was short-lived. A friend discovered that IKEA carries its own version of Elderflower Drink Concentrate (Dryck Fläder to you Swedes) that, when mixed with sparkling water, tasted virtually identical to the pressé I knew and loved—at a fraction of the price.

In the midst of all this, the holy grail of elderflower beverages made its debut. In 2007, St. Germain Elderflower Liqueur descended from heaven on a cloud of tiny white flowers for the delectation of humankind. I’m not sure what we did to deserve it, but to say that this liqueur is swoon-worthy would be an understatement. From its sweet, nectar-like flavor to the gorgeous packaging that evokes the decadent height of the Roaring Twenties, this product is truly in a class by itself. It can be enjoyed straight from the bottle, but we at The Swoon Society love adding it to a flute of sparkling wine (Kirsti prefers Gruet Extra Dry to balance the sweetness of the liqueur, but if you have a sweet tooth like me, try Gruet Demi Sec). 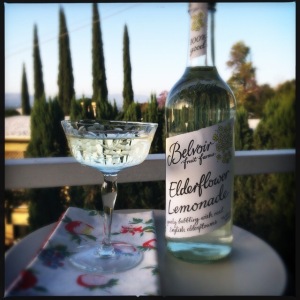 Recently, I’ve seen Belvoir Elderflower Lemonade on the shelves of World Market, but I prefer the flexibility and price of the elderflower concentrate (Belvoir also makes an Elderflower Cordial, which is the same as concentrate). In addition to making elderflower soda, it can be used as an ingredient in cocktails and a sweetener for lemonade, or just mixed with plain water for a light thirst quencher.

Now that the elderflower seems here to stay, I no longer worry about being able to find it, but I also make sure to savor it and never again take it for granted. The blossoms only appear for a few weeks in late spring and must be harvested at that time to last the rest of the year, so take a lesson from me and respect your elderflowers!

Belvoir Elderflower Pressé (marketed as Lemonade in the U.S.) and Cordial can be found at World Market, some British import shops, and online at Amazon. St. Germain Elderflower Liqueur can be purchased at BevMo. Gruet Extra Dry and Demi Sec are available at many specialty wine shops and liquor stores.