Christmas has forced me to face my fears on more than one occasion. When my father was no longer able to hang lights on the outside of the house, I had to conquer my fear of heights to get on the roof and do it myself. Ditto for climbing to the top step of the ladder in order to place the angel atop our 13-foot tree. 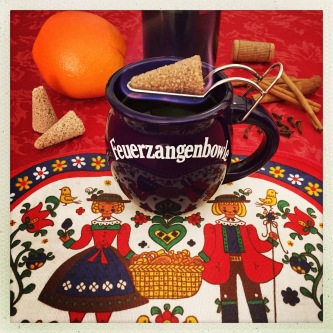 As the granddaughter of German immigrants, I enjoy many German Christmas traditions, so when I read about Feuerzangenbowle (FOY-er-TSAHNG-en-bowl-uh)—literally, “fire tongs punch”—I knew I had to try it…but I am scared of working with fire.

I have always had an anxious relationship with fire. One year at a family dinner, tissue paper from a gift bag fell into a candle flame on the table and caught fire. I panicked and dumped an entire pitcher of water on it, dousing my sister in the process, which led to yelling (and slapping). Fearful of starting a fire in my own fireplace and burning the house down, I prefer to enjoy one at Kirsti’s, where her husband Aaron is master of the hearth and assumer of the risk.

But I really wanted to try this punch.

The practice of setting fire to a rum-soaked sugar cone suspended by a set of specialized “tongs” over a bowl of mulled wine has a long history in Germany, but gained in popularity after the release of the 1944 film Die Feuerzangenbowle, which has become a cult classic. The sugar cone caramelizes as it burns, dripping into the punch bowl to sweeten a blend of red wine, citrus, cinnamon, and spices.

It’s a showstopper at parties with a large cone set aflame, but I wanted to start small, so I purchased mini sugar cones and tongs for experimentation. My first couple of attempts were failures, since the rum I’d acquired did not have a high enough proof to catch fire, but I was assured by subsequent research that Bacardi 151* would satisfy all my flaming needs. 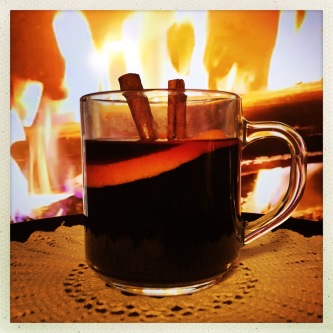 With tools and ingredients on hand, I set to brewing. I began with just a cup of wine, adapting the recipe (below) for one person. Once the tongs and sugar cone were in place, I poured the rum over the sugar. Then, with the longest match I could find in one hand and a fire extinguisher in the other, I lit the cone.

The flame started small, but quickly shot up higher than I’d expected, giving me a moment of panic, but it subsided as the sugar began dripping into the pot. In less than a minute, the punch was ready to drink—and it was delicious! Of course, you have to like mulled wine, which I do, but the addition of caramelized sugar makes this a sweet holiday treat.

Since my trial by fire tongs punch, I have made these seasonal spirits several more times, both on the stove and in a special mug with attached tongs. I no longer fear the flame and feel ready to tackle the larger version at a future holiday gathering. Until then, you can find me sitting by my (virtual) fire in front of the tree getting punch drunk on Christmas cheer. Fröhliche Weihnachten! 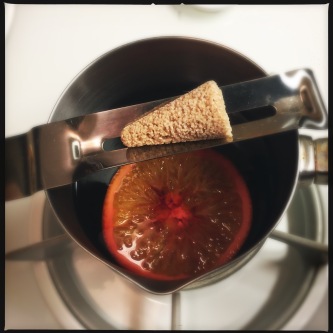 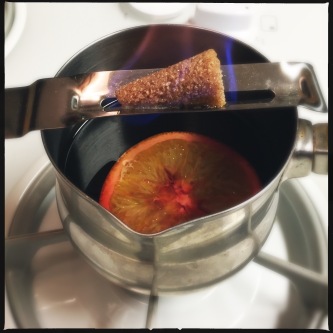 Directions:
In a large pot, add both bottles of wine and all ingredients except the sugar cone and the rum. Simmer the wine, fruit, and spices over low heat for about 15 minutes. Don’t boil the wine—it should be hot, but not scalding. Carefully add the hot wine (including fruit slices and whole spices) to the punch bowl. For dramatic flare, place the punch bowl in a dimly-lit room. If you have a Hot Pot set, light the candle below the punch bowl to help keep the wine warm. Place the stainless steel bridge across the top of the punch bowl. Unwrap the sugar cone and place it on the bridge. Slowly pour the 151-proof rum onto the cone, rotating the cone until it is soaked with the rum. When guests have gathered around, light the sugar cone with the match or lighter.* The sugar cone will dissolve as the burning rum heats up the cone. The caramelized sugar will drip into the punch to sweeten it and the rum will enhance the flavor.

.
*Use extreme caution with alcohol at this proof, as it is highly flammable. When you light the sugar cone, do so from a distance with a long match or lighter and make sure there is sufficient space for the cone to flame upwards (i.e. away from hanging light fixtures or decorations). Do not put your face near the cone or look down on it from above as you light it. Bacardi 151 comes with a stainless steel flame arrester over the opening to prevent the rum from igniting inside the bottle. It can be found in select liquor stores and is available for purchase online.