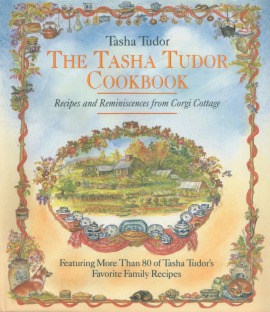 Presidents Day may be celebrated on the third Monday in February, but today marks the actual date of George Washington’s birthday, so that means it’s time to serve up a slice of Washington Pie. I first read about this dessert in The Tasha Tudor Cookbook, where it’s mentioned that “the ‘pie’ is actually a delicate cake,” but it took a little sleuthing to discover why it’s referred to as pie. Although this recipe—which dates back to the mid-1800s—calls for raspberry jam spiked with cherry brandy between the cake layers, other versions substitute a cream filling like that used in Boston Cream Pie. Hence, Washington Pie.

Tasha Tudor’s great-great-grandfather, Colonel William Tudor, was friends with George Washington and served as his Judge Advocate General, so her family celebrated the President’s birthday every year with a tea party that included Washington Pie. As both an admirer of Tasha Tudor and someone who is always on the lookout for a reason to enjoy afternoon tea and treats, I decided to adopt the tradition myself. The recipe is quite simple and can be made in advance, since Tasha recommended that the cake be refrigerated overnight to enhance its flavor.

A First Family affair: savoring a slice of Washington Pie with a glass of Martha Washington’s Cherry Bounce.

I cannot tell a lie: once you cut down this cherry* sweet, you’ll want to build a monument to it, so join me in honoring our first President with a delicious tradition that’s as American as Washington Pie. 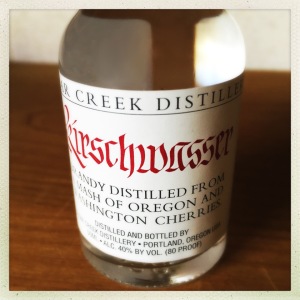 Preheat the oven to 350 degrees F. Cut rounds of wax paper to fit the bottoms of two 8-inch round cake tins (or use the nifty Cake Pans with Cutter Bars that I chose as one of my picks for our Holiday G.I.F.T. Guide). Grease and flour the cake tins and paper.

In a large mixing bowl, cream together the butter and sugar. Add the eggs and mix until light. Sift in the flour and baking powder, alternating with the milk. Beat until light and fluffy. Pour the batter into the prepared cake tins and place the tins in the preheated oven to bake for 25-30 minutes. When the batter begins to pull away from the sides of the pans, test for doneness with a cake tester. Take care not to overbake.

When the cakes are done, remove them from the oven and set the tins on cooling racks for 10 minutes. Then invert the cakes on the racks, peel off the wax paper (if using), and allow the cakes to cool completely.

Mix the Kirschwasser in the raspberry jam. Slice the cakes in half horizontally. Place one layer of the cake on a cake plate and spread it generously with the raspberry jam mixture. Repeat the process twice more and then top with the fourth layer. Prior to serving, shake confectioner’s sugar lightly over the top of the cake. To create a pattern, place a doily on top of the plain cake before shaking the sugar over it, then remove the doily. Serves 10 to 12.

The Tasha Tudor Cookbook can be purchased from Amazon, Barnes & Noble, and AbeBooks.

*Technically, it’s a raspberry sweet with a splash of cherry, but just roll with it, O.K.?